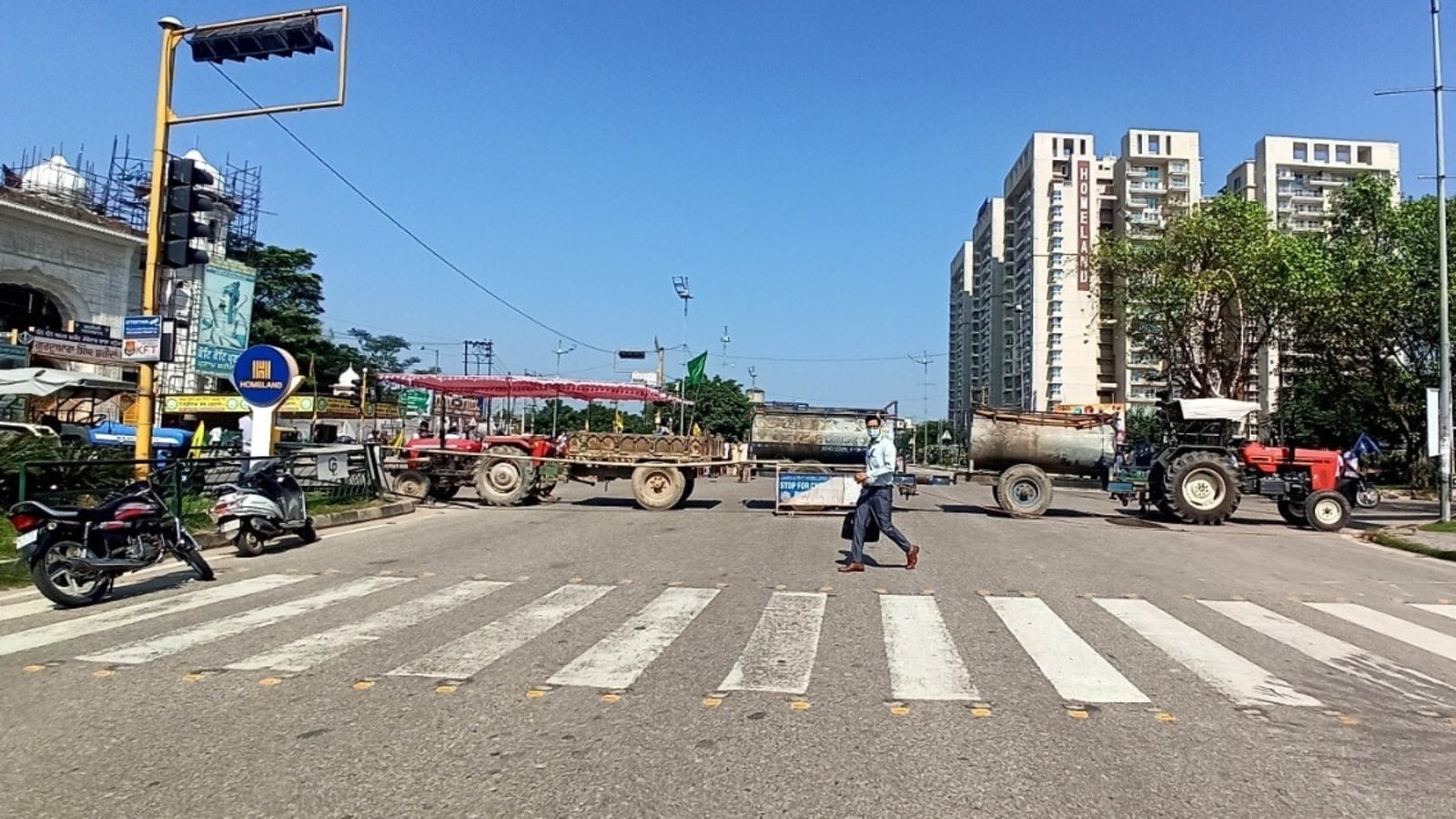 The 10-hour-long Bharat Bandh, which was scheduled to end at 4pm, was successful, the protesting farmers said on Monday. The pan-India shutdown was organised by the Samyukt Kisan Morcha (SKM) against the three farm laws passed by Parliament in September last year.

“Our ‘Bharat Bandh’ was successful. We had the full support of farmers… We can’t seal down everything as we have to facilitate the movement of people. We are ready for talks with govt, but no talks are happening,” sais Bharatiya Kisan Union (BKU) spokesperson Rakesh Tikait. BKU was one of the participants of the bandh called by the SKM, an umbrella organisation of nearly 40 unions.

The bandh was organised on Monday (September 27) to mark the first anniversary of the assent given to the three farm laws by President Ram Nath Kovind.

The SMK said there was “an unprecedented response, beyond anyone’s expectations” to Bharat Bandh. Many non-NDA parties extended support to the nationwide protest.

Also Read | ‘India is open’: Twitterati take on Bharat Bandh with this trend

There were reports of disruption in traffic movement in many states, while some claimed there was no impact of Bandh. Heavy police presence was seen across the county to maintain law and order.

Farmers blocked national highways and major link roads in both the states, due to which the police had to diverted traffic at several places.

The shutdown was almost complete in Punjab, with transport services suspended during the bandh period, while shops and other commercial establishments remained shut at most places. National and state highways in several districts, including Amritsar, Rupnagar, Jalandhar, Pathankot, Sangrur, Mohali, Ludhiana, Ferozepur, Bathinda, were blocked by the protesters.

Demonstrations and rallies were held across Jammu district on Monday in support of the Bharat Bandh called by farmers to demand repeal of the Centre’s three agri laws. Led by CPI(M) leader M Y Tarigami, hundreds of activists and farmers took out a rally and sat on a dharna on the main road, leading to disruption of traffic.

A similar demonstration was held in Srinagar where some farmer leaders demanded minimum support price for farm produce.

Gujarat largely remained peaceful on Monday during the 10 hours of Bharat Bandh. However, there were reports of Surat-Mumbai and Ahmedabad-Rajkot highways being blocked briefly which affected traffic movement in few areas. Police detained about 25 people and restored traffic movement on the road, news agency PTI reported quoting a police official.

Commercial establishments and local transport were operating as usual and normal life remained unaffected across Maharashtra on Monday. An APMC remained closed in Pune and a pro-farmers’ outfit staged a road blockage in Nagpur, while some protesters were detained at some places and later released, they said. In Mumbai, Congress workers, holding placards, assembled at some places like Andheri and Jogeshwari and shouted slogans against the farm bills, but shops and other commercial establishments were open as usual and traffic movement was normal, said the police.

Assam remained unaffected by the Bharat Bandh on Monday as public transport operated as usual, markets were open and offices registered usual attendance.

The opposition Congress, which supported the bandh, did not organise any protest programme in the state. In Guwahati, members of the SUCI (Communist) took out a protest rally in the morning, raising slogans against the three farm laws.

The coastal state largely remain unaffected by the Bharat Bandh on Monday. All services, including the public transport, banks, trains and commercial establishments, operated normally during the bandh duration. The All India Trade Union Congress (AITUC) supported the call for bandh. “We have not stopped any work, but workers in all the industrial estates held protests for half-an-hour in their respective areas before resuming the work,” AITUC Goa unit secretary Suhas Naik said.

Left activists blocked roads and railway tracks across West Bengal on Monday in support of the Bharat Bandh. Educational institutions are already shut in state the due to the Covid-related restrictions.

Road blockades were held in most of the major towns and cities in the state, including in district headquarters of Jalpaiguri, West Midnapore, East Midnapore, Hooghly and Coochbehar.

However, normal life remained largely unaffected in the state. Markets and shops were opened as usual, while public transport operated almost normally, except for a few hitches.

The governments of Tamil Nadu, Chhattisgarh, Kerala, Punjab, Jharkhand and Andhra Pradesh have extended their support to the bandh, and the effect of protest was seen in these states.

The roads in Kerala’s Thiruvananthapuram wore a deserted look and shops are closed in as the trade unions affiliated to LDF and UDF have supported the call for Bharat Bandh.

Railway services were affected by the bandh with services of as about 25 trains getting delayed or diverted.

According to Northern Railway, the rail operations in Delhi, Ambala and Firozepur divisions were impacted by people sitting on tracks.

Farmers have been protesting at different sites since November 26 last year against the three enacted farm laws: Farmers’ Produce Trade and Commerce (Promotion and Facilitation) Act, 2020; the Farmers Empowerment and Protection) Agreement on Price Assurance and farm Services Act 2020 and the Essential Commodities (Amendment) Act, 2020.

Farmer leaders and the Centre have held several rounds of talks but the impasse remains.