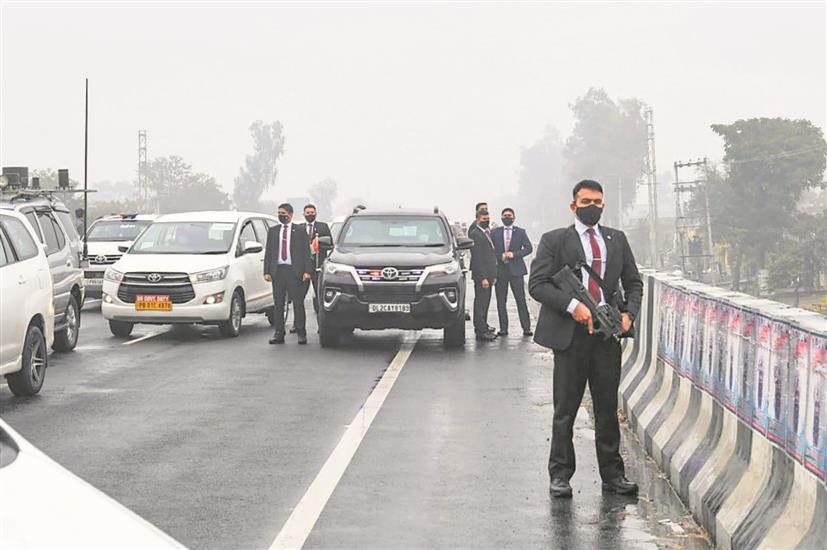 The Supreme Court on Monday ordered setting up a high-level committee headed by a former judge of the top court to probe the security lapse during Prime Minister Narendra Modi’s visit to Punjab last week.

Centre’s notice self-contradictory Your show-cause notice is self-contradictory. By constituting the committee, you seek to inquire if there is a breach of the SPG Act and then you hold state Chief Secretary and DGP guilty…. Who held them guilty? — CJI-led Bench Committee to submit report at earliest The panel will submit its report to the top court at the earliest

Once the committee submits its report, the SC will pass orders for action to be taken by the Centre and Punjab Govt

A three-judge Bench led by CJI NV Ramana ordered the inquiry committees of the Centre and the Punjab Government to halt their respective probe into the January 5 security lapse.

The committee led by a retired Supreme Court judge will include the Chandigarh Police chief, National Investigation Agency IG, Punjab and Haryana High Court Registrar General and the Punjab GP (Security), the top court said, adding that a detailed order would be released later.

The committee will submit its report to the top court at the earliest, it said. Once the committee submits its report, the top court will pass orders for action to be taken by the Centre and the Punjab Government. The order came after the Punjab Government demanded an independent probe into the breach in the Prime Minister’s security, saying the state would not get a fair hearing in any probe carried out by the Centre.

Just before the crucial hearing, many Advocates-on-Record (through whom cases are filed in the Supreme Court) allegedly received calls from an anonymous number from the UK taking responsibility for the security breach at Hussainiwala flyover.

The Supreme Court Advocates-on-Record Association (SCAORA) has written to the Supreme Court Secretary General (with a copy to Delhi Police Chief), demanding immediate action against those responsible for it.

According to the SCAORA letter, the caller also threatened the Supreme Court judges, asking them to refrain from hearing the PIL as “the court had not been able to punish the culprits of the 1984 anti-Sikh riots”.

During the hearing on a petition filed by an NGO, Lawyer’s Voice, seeking a probe into the security lapse, Punjab Advocate General DS Patwalia took strong exception to the seven show-cause notices issued to the SSP concerned, Chief Secretary and senior officials of the state, asking them to explain why action should not be taken against them. The petitioners wanted the court to fix responsibility of the Punjab Chief Secretary and the state’s DGP, place them under suspension and direct the Centre to initiate departmental action against them.

Alleging that “there is some politics behind it”, Patwalia said, “I will not get a fair hearing from the Central Government. Please appoint an independent committee, and give us a fair hearing….”

Solicitor General Tushar Mehta clarified that the show-cause notices were issued before the court’s order. “If you have already made up your mind then what’s the need for having an inquiry…. There’s a lapse and it has to be found out who is responsible for it,” the Bench said.

“Your show-cause notice is totally self-contradictory. By constituting the committee, you seek to inquire if there is a breach of the SPG Act and then you hold the state Chief Secretary and the DGP guilty. Who held them guilty?” it wondered. The Solicitor General said these were only show-cause notices and not findings. Noting that it was an issue of the security of the PM, Mehta said it could be examined by senior officials of the Central Government. The report could be placed before the Bench and then “Your Lordships can take an appropriate decision,” Mehta said.

Patwalia objected to it and reiterated his demand for an independent probe. Finally, the top court ordered setting up a committee headed by a former judge of the Supreme Court.