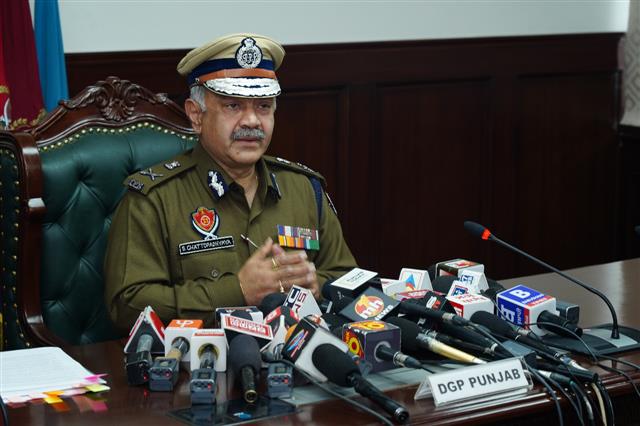 DGP Siddharth Chattopadhyaya on Saturday said the Ludhiana blast accused had links with the agencies abroad, drug mafia and Khalistanis.

He said the Punjab Police with the help of intelligence and central agencies had unravelled the blast incident within 24 hours.

Addressing a press conference here, he said when he had joined the police, terrorism was the only challenge, but now drugs mafia, organised crime and terror are a dangerous cocktail and the Ludhiana blast is an example of that.

“I am proud of the Punjab Police, who have successfully cracked the Ludhiana blast case in less than 24 hours,” said Director General of Police (DGP) Punjab Siddharth Chattopadhyaya told a press conference here at the Punjab Police Headquarters in Chandigarh on Saturday.

He said police had identified the suspect as Gagandeep Singh, a 31-year-old man from Khanna who’d been dismissed from service after he was caught with 385 kg of heroin. The suspect, Gangandeep Singh was posed as a munshi at PS Sadar Khanna at the time of his arrest.

Police now claim that the suspect could become associated with some pro-Khalistani militants in jail after he was arrested on drug charges in 2019. Singh died in Thursday’s explosion that occurred in a toilet at the Ludhiana district court.

Six people were wounded in the incident.

Singh was released on bail in September and was scheduled to appear in court for his hearing on Friday, a day after the explosion, police said.

The motive for the blast, DGP Chattopadhyaya said, was to cause panic and fear.

“Preliminary investigations suggest that accused Gagandeep could have developed links with pro-khalistan elements in the jail, who used him to target the court premises with the intention to disturb the peace of the State,” DGP Chattopadhyaya said in answer to a journalist’s question.

Chattopadhyaya claimed that while DNA samples were collected for analysis, police were able to firmly identify the suspect with the help of a tattoo mark on his right arm.

Police were still analysing samples from the blast site to determine what the explosives were made of, he said. “A forensic team has collected some vital clues like damaged mobile set and burnt clothes on the body of the deceased besides other material evidence,” the DGP said.

Meanwhile, the suspect Gagandeep Singh’s wife Jaspreet Kaur said her husband had left home at 9.30 am on the morning of the blast and his phone was switched off all day. A press note from the police headquarters said she’d identified the suspect’s clothes and tattoo.

*It was a big incident

*We found tattered clothes, mobile SIM and a tattoo

*Deceased was carrying the explosive

*That was immediate assessment. It turned out to be correct

*Dismissed cop Gagandeep carried out the blast and died

*His accomplices were Amandeep and Vikas

*He was bailed out after remaining in jail for two years

*We suspect he underwent transition from narcotics to bombs in jail. We can’t disclose much. But he had links with agencies abroad and had links with narcotic smugglers, drug mafia and Khalistanis

*About sacrilege at Golden Temple, SIT under DCP working. Deceased still not identified.

*The Kapurthala incident happened at a ‘private’ gurdwara. We registered a case of sacrilege. It turned out it was not a case of sacrilege but of theft. He was lynched, which is unfortunate and will not be tolerated. No one would be allowed to take law in hand. That is why we arrested the accused granthi, who carried out the merciless killing

*Assembly polls: Police are geared up for free and fair polls

*Rest assured the police are active and will have more presence.

*We will deploy men on individual security

*We seek full cooperation and help from the public

*Inform police about any suspect person or event. Informer will be kept secret but no false information due to personal enmity

*Punjab needs to be at the top again, in agriculture, industry and sports. Why have we moved towards chitta and gangsters. Show your prowess in sports field not kill or scare common people. Why are youths leaving Punjab? We need to be responsible

*Today I call mafia and gangsters and terror sympathisers to surrender. In coming days we will take strict action

*Regarding Ludhiana blast, RDX does not seem to have been used but we will wait for the forensic report to rule it out

*The accused seems to be lone wolf but investigation is on

*Accused was good in computers and technology

*He seemed to be connecting wires or assembling the bomb. He was alone. He was in touch with other elements in jails and abroad. He was frustrated due to the case against him

*Narcotics turnover is 40,000 crore now. All Punjab Police personnel are with STF now

*The blast had narcotic terror angle

*He might have planned the blast to scare the judiciary

*We have detained more persons. We are investigating external conspiracy. Leads point towards Pakistan as he had links with smugglers

*Security lapse took place at the courts. There were more than 20 entry and exit points

*Golden Temple sacrilege is a very sensitive issue. The SGPC has its own security and is carrying out its own investigation while we are doing our own. It is a delicate situation.