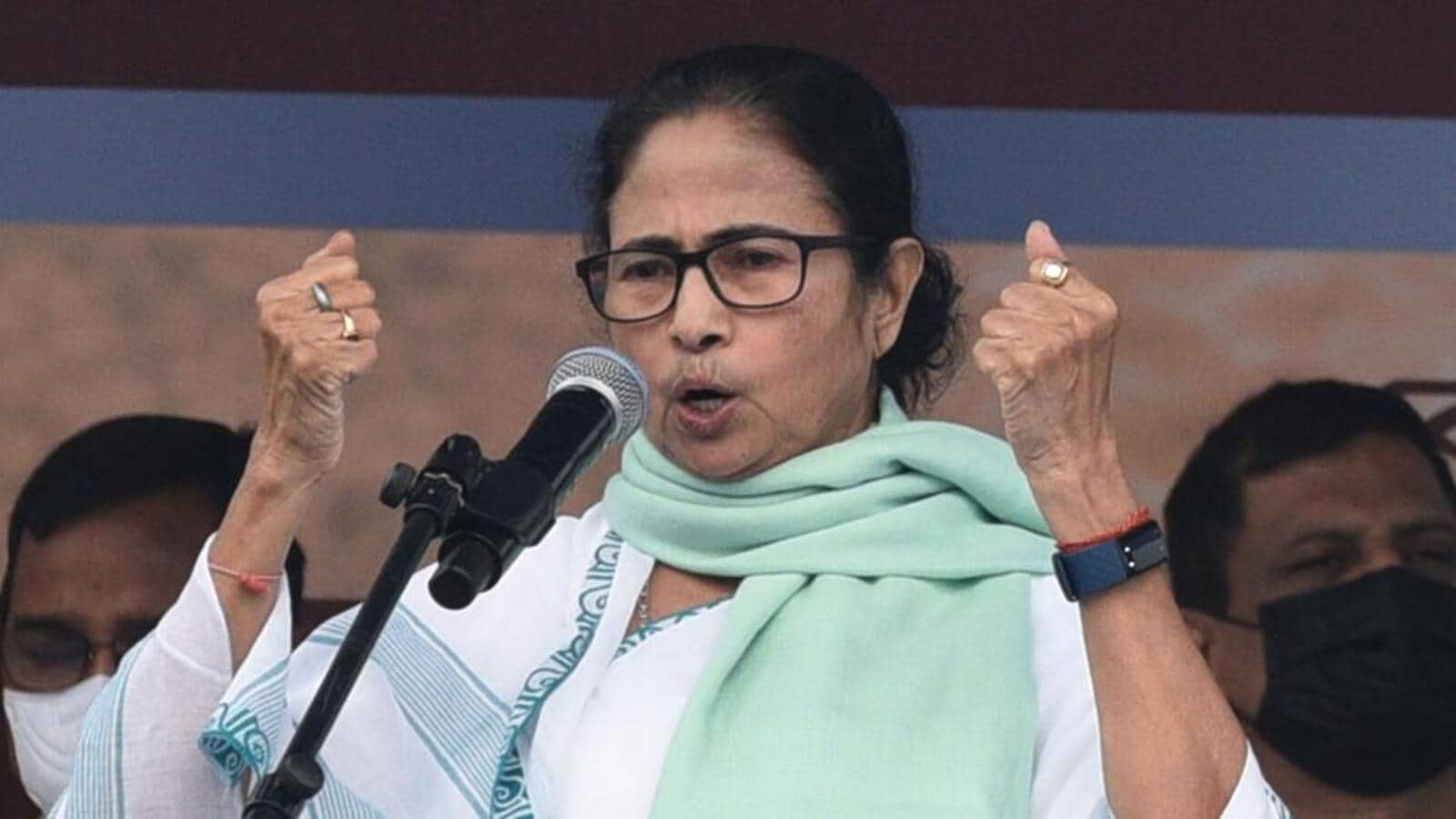 From shifting of the Amar Jawan Jyoti in Delhi to dissolution of the Planning Commission of India, West Bengal chief minister Mamata Banerjee picked every weapon in her arsenal on Sunday to target the Central government and the Bharatiya Janata Party (BJP) while celebrating the 125th birth anniversary of Netaji Subhas Chandra Bose in Kolkata.

Hours before Prime Minister Narendra Modi was scheduled to light up the holographic image of Netaji at India Gate, Banerjee, who garlanded Bose’s old statue in the Maidan, accused the Centre of destroying India’s federal structure and downplaying the history of Bengal and the nation.

Banerjee did not name any BJP leader during her 40-minute speech but the targets of her attack were apparent. She even referred to the proposed changes in the service rules for Indian Administrative Service (IAS) officers and freezing of the bank account of the Missionaries of Charity, the institution set up by Saint Teresa in Kolkata where she worked all her life.

Demanding a national holiday on January 23, Banerjee criticized the Centre for winding up the Planning Commission of India that Bose had envisaged.

After coming to power in 2014, the first National Democratic Alliance (NDA) government led by Modi dissolved the Planning Commission of India and replaced it with the Niti Aayog.

“Whether it is the clarion call of ‘Jai Hind’ raised by Netaji, the national anthem composed by Rabindranath Tagore or the national song penned by novelist Bankim Chandra Chattopadhyay, Bengal has been the torchbearer. Why is Bengal being ignored today in this manner? Nobody can ignore Bengal. I challenge them. Nobody can wipe out the history of Bengal and India. Those trying it will burn their hands. Lighting a torch or setting up a statue of Netaji does not bestow the respect he deserves. Why is Netaji’s disappearance shrouded in mystery 75 years after Independence?” asked Banerjee.

“This (Central) government had promised to reveal the truth but it did nothing. Our government released all documents on Netaji that we had in our archives,” she added.

Announcing that her government will set up its own planning commission, Banerjee said: “Bengal is the holy ground of our freedom movement. India could not have won Independence without Bengal. I say this with pride.…… To know Netaji, you have to first know his source of inspiration, Swami Vivekananda… Today some people want to divide the nation in the name of Hindus and Muslims. I will urge them to read the works of Netaji and Swami Vivekananda.”

“I urge these people to know Gandhi, Ambedkar and Netaji. Rishi Aurobindo propagated the federalism we talk of today. None of them said nationalism can be established by dividing the country. Netaji said nationalism lives in unity. We will not accept those who try to make us forget history. It is necessary to include our history in school and college textbooks,” said Banerjee.

“Gandhi was born in Gujarat and he ended all communal riots. When India was embracing her Independence in 1947, Gandhi was not present in Parliament. He was in Kolkata, holding a fast to end the riots,” said Banerjee.

“Bengal’s history is India’s history. Bengal’s history is world’s history… Most of our freedom fighters were from Bengal and Punjab. Today you are doing politics with a war memorial. We salute all soldiers who laid down their lives. They cannot be divided on the lines of religion,” said Banerjee.

“I recently attended a seminar. Historians present there said all efforts are being made to distort history. Are we supposed to sleep when this happens? India must rise. Hindustan must march forward. It must love Netaji, Ambedkar, Gandhi, Maulana Abul Kalam Azad, Bhagat Singh and Birsa Munda. A leader must lead for all. He must be accepted by all. He must be one who respects all and inspires all without looking at their political colour. Today you are trying to preach religion. Netaji’s right-hand man (in the INA) was Shahnawaz Khan. We did not choose him (Khan),” said Banerjee.

“Vivekananda had food with a Muslim family. Leaders often visit Belur Math to pay homage to him. Do they know that there is a darga (mausoleum) inside Belur Math? Go and visit it once,” the chief minister said without making any reference to the visits of the Prime Minister and Union home minister Amit Shah.

“We have to give proof of our religious identity. I don’t need any character certificate from the BJP party or anyone. I need my certificate from the people of this soil. Would it harm anyone if our tableau on Netaji was allowed at the Republic Day Parade? Why is there an allergy for Bengal? In the past, our tableau on Gandhi and Rabindranath were rejected. Today you are setting up a statue under pressure from us. What were you doing all these years? See our statue at Red Road. It is alive, not an artificial image. Setting up a statue does not end your responsibility,” said Banerjee.

“You have spent crores on statues. Have you ever read the history of India? Have you protected our history? Today, everyone is afraid to speak up. Everybody is scared,” she said.

“Despite being a Muslim, poet Kazi Nazrul Islam composed some immortal Shyama Sangeet (songs dedicated to Goddess Kali) that your blunt religious system cannot produce…. The bank accounts of the Missionaries of Charity were frozen recently. Luckily, we came to know of it and the accounts were restored. The matter was discussed even in other nations,” she added.

“Netaji does not belong to Bengal alone. He belongs to the world and, to India…… We will set up a second university in his name and a monument dedicated to the Azad Hind Fauj. The present government of India dissolved the Planning Commission that Netaji envisaged. I cannot find words to condemn this act. What Netaji thought of is required even today. We will set up a planning commission in Bengal. Netaji may not find his place in Delhi, he will always be remembered in Bengal,” said Banerjee.

Announcing a series of programmes, the chief minister said her government will set up Jai Hind Bahini in schools and colleges on the lines of the National Cadet Corps and several museums dedicated to Netaji and other freedom fighters.

The Bengal BJP was quick to lead a counter attack on the chief minister.

“TMC carries the legacy of the Congress which insulted and opposed Netaji and forced him to quit the Congress. These leaders have no right to make such statements. TMC’s Planning Commission will only help some people make money while the state’s debt burden will increase,” said Bengal BJP’s chief spokesperson Samik Bhattacharya.

Leader of the opposition in the Bengal assembly, Suvendu Adhikari, said, “No wonder Banerjee wants another holiday on Netaji’s birthday. She has already sent the entire state on a long holiday.”

For this to happen to a #BritishSikh in a place of British academia in 2022 is abhorrent to the core. @cusikhsoc
Surely the E&D training needs to be examined here. This is sinful & shameful to happen to a #Sikh in the UK with the history Sikhs have here.