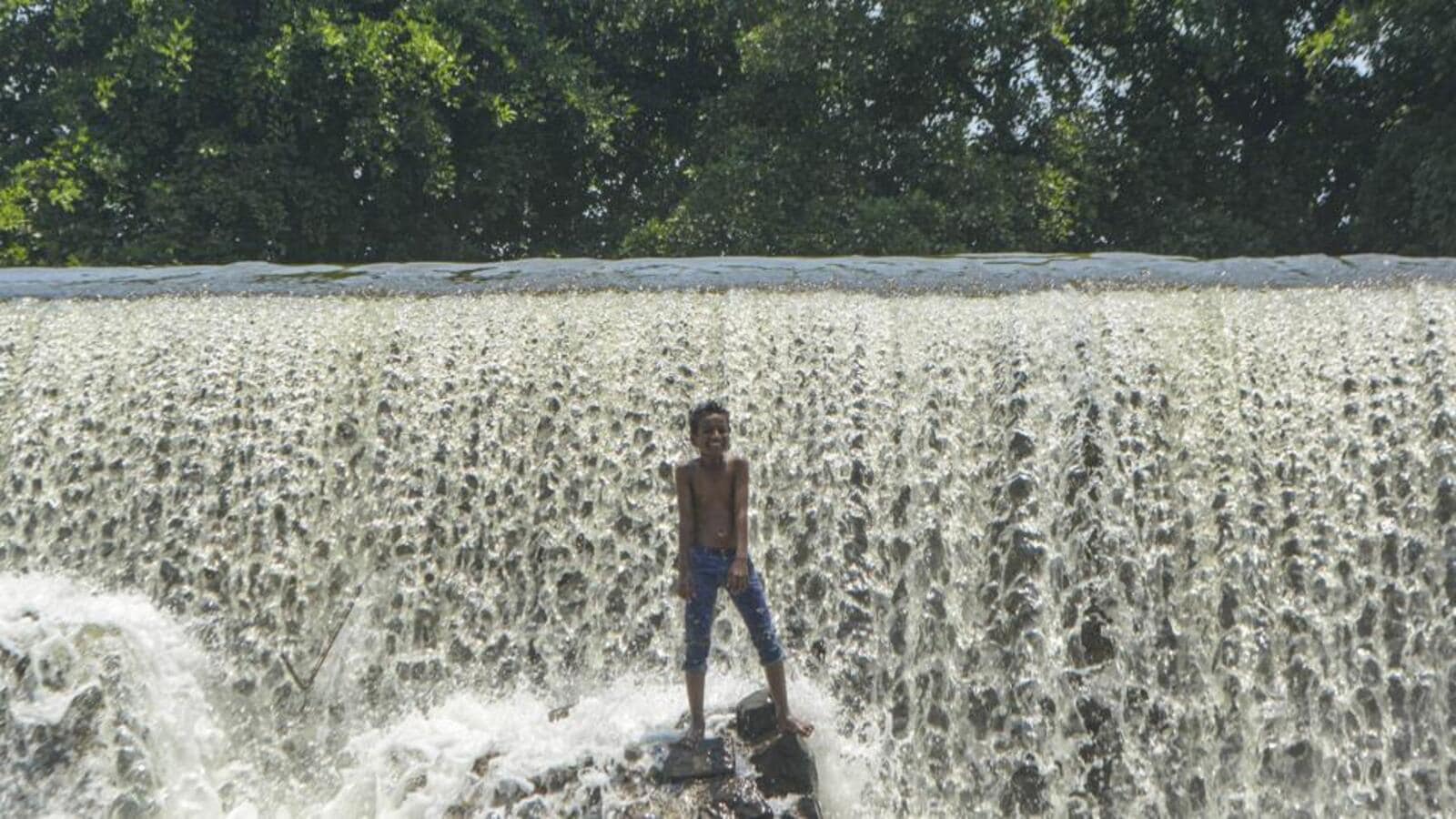 NEW DELHI: Heatwave to severe heatwave conditions are likely to continue over several parts of northwest India and some parts of east India, India Meteorological Department (IMD) warned on Friday.

IMD has issued an orange warning for all of northwest India, central India and Jharkhand for Friday and Saturday, and a yellow warning for almost the entire country except a few pockets till May 3 in view of extreme heat. An orange alert is for local authorities and disaster management authorities to be prepared for disasters and a yellow alert is to keep watch or remain updated.

The World Meteorological Organisation (WMO) in a statement on Friday said maximum temperatures reached 43-46°C in widespread areas on 28 April and that this intense heat will continue until May 2. It referred to a warning by the Pakistan Meteorological Department which has said that the unusual heat will enhance the melting of snow and ice in the mountainous regions of Gilgit-Baltistan and Khyber Pakhtunkwa, and might trigger glacial lake outburst floods or flash floods in vulnerable areas.

WMO said it was premature to attribute the extreme heat in India and Pakistan solely to climate change but it is consistent with what is expected in a changing climate.

“Heatwaves are more frequent and more intense and starting earlier than in the past. The Intergovernmental Panel on Climate Change, in its Sixth Assessment Report, said that heatwaves and humid heat stress will be more intense and frequent in South Asia this century,” WMO statement said adding that India’s ministry of earth sciences in a 2020 report has already noted that frequency of warm extremes over India has increased during 1951–2015.

Climate and health experts also warned that the ongoing heatwave must be having a huge toll on public health which needs to be carefully documented.

“We are expecting a marginal increase in temperature today and tomorrow over northwest India. They could be higher than the maximum temperatures recorded on Thursday. From May 1, we can expect a dip in temperatures over east India. Models are showing good pre-monsoon activity over east India in the coming days. There will be thunderstorm activity over parts of northwest India especially the western Himalayas around May 2 to 4. Maximum temperatures could be back to normal temporarily after that,” said Mahesh Palawat, vice president, climate change and meteorology, Skymet Weather.

“From March 1 to April 20, large parts of north India are dry. Moreover, due to an anti-cyclone over the Arabian Sea, winds are moving in the clockwise direction creating an area of subsidence where hot, westerly winds are blowing. There are clear skies so there is abundant radiation. This has led to this unusually intense heat wave spell over large parts of the country. This dry, hot weather is likely to impact both quality and yield of wheat in many parts of north India,” added Palawat.

During an anti-cyclone, air pressure is high on the surface, causing the air above it to come down. This air warms up as it comes down on account of high pressure. The outward hot winds caused by this are ranging as far as Odisha and West Bengal. But early next week, the western disturbance will likely put an end to this anti-cyclone, pushing moisture-laden winds in from both the Arabian Sea and the Bay of Bengal, a phenomenon that will likely reduce temperatures through most of the plains.

According to a research paper by scientists from the Indian Institute of Tropical Meteorology (IITM) published in Weather and Climate Extremes journal of Elseiver last year, the mortality rates for extreme weather events are on a decline but rising significantly for heatwaves and lightning events.

The mortality rate of tropical cyclones reduced by 94% in the past 20 years, whereas for heatwaves and lightning, it increased by 62.2% and 52.8%, respectively, said the study, which assessed mortality rates between 1970 and 2019.

Heatwaves have now become the second most disastrous event (after lightning) linked to mortality, according to the paper. Mortality rates have increased by almost 27% in 2010–2019 as compared to 2000–2009 with a corresponding increase (24%) in the number of heatwave events.

Using a probabilistic model, the paper has shown that the increase in the summer mean temperatures in India, during 1960–2009 caused a 146% increase in the probability of heat-related mortality events of more than 100 people.

There have been 2,3.54 deaths per heatwave event during the 2000 to 2019 period. “The warming of the tropical Indian Ocean and more frequent El-Nino events in the future may further lead to more frequent and longer heatwave episodes over India. Therefore, even though the mortality due to floods and tropical cyclones has declined, it has increased for heatwaves,” the paper said.

Experts have flagged that in regions with high heat and humidity, heat-related deaths need to be documented carefully during the ongoing spell.

“The data on deaths are recorded by the health department or even the revenue department in some states. As of now, we do not have a very systematic way of reporting heat-related deaths. For example, majority of heat-related deaths are not classified as heat deaths. They are mostly among older people with co-morbidities whose deaths may be reported as heart failure, stroke or kidney failure from dehydration. These are called indirect heat strokes. There are also sun strokes among people who are working outdoors and are exposed to sunshine. Almost 80 to 90% of heat-related deaths are indirect and may not be documented. They can happen at night or evening also but are mainly due to heat stress.

In Ahmedabad, there were 800 excess deaths due to heat in May 2010 in only a week. Most of these were indirect heat strokes. That data led to the development of Ahmedabad heat action plan. Any temperature above 45 °C could be lethal. During the week when we recorded 800 excess deaths in Ahmedabad, maximum temperatures were 46 to 47 °C, When high maximum day temperature is associated with high minimum night temperature, it leads to more deaths” said Dr Dileep Mavlankar, who heads the Indian Institute of Public Health in Gandhinagar

“In some regions experiencing heatwaves, it is not just about the high temperatures but the accompanying rise in humidity too that matters. Sustained heatwaves can be dangerous, especially when combined with high levels of humidity. If the air has high levels of humidity along with the heat, the body stops sweating and becomes unable to regulate the internal temperature. This can result in a heat stroke leading to multiple organ failure and deaths,” said Roxy Mathew Koll, a climate scientist at the Indian Institute of Tropical Meteorology.

“Both temperatures and humidity are increasing in India and all over the world. Air can hold more moisture with more heat, and the combined impact of heat and humidity hence becomes critical. However, our heatwave forecasts or policies do not factor in this aspect. With more warming under climate change impact, the combined impact of heat and humidity is set to rise. A recent report from the Ministry of Earth Sciences points out that the mortality rates per million for heatwaves have increased by 62.2% during the last four decades. Heatwaves affect work productivity, by reducing performance and increasing heat-related illness. A decline of 30-40% in the work performance is projected over India by the end of the century due to the elevated heat stress levels,” he added.

“We are sharing our data and forecasts with the National Disaster Management Authority for documentation of mortality. The National Crime Records Bureau maintains data on deaths due to heat waves and other natural hazards,” said M Mohapatra, director general, IMD.

“The #heatwave in #India and #Pakistan is hitting many millions of people and the economy. Temps topped 45°C (113°F), will ease by 2 May. #Heatwaves are one of the signs of #climatechange.” Tweeted WMO on Friday.

“The significance of the current Indian/Pakistani heatwave is less about smashing records (though various records have fallen) and more about very long duration. The last 6 weeks have been repeatedly challenging the top of the historical range and baking this part of the world,” tweeted Robert Rohde, Berkeley Earth.