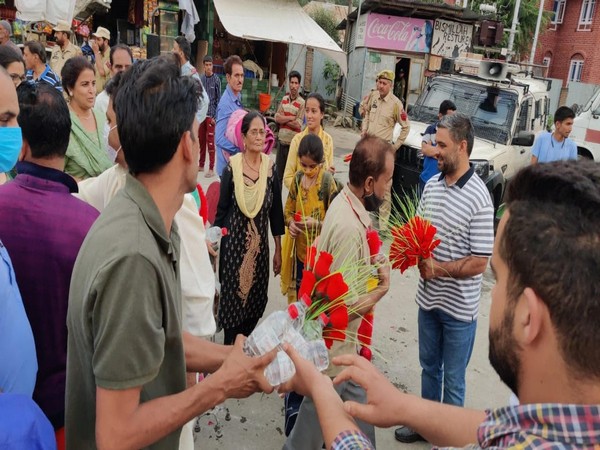 Srinagar, Jammu and Kashmir, India: The Voice for Peace and Justice, on Tuesday, welcomed the pilgrims at Mata Kheer Bhawani  where mela has been organised after two years of break due to COVID-19 outbreak at Tullamullah Ganderbal. The organization distributed water, juice and roses as a gesture of communal harmony, brotherhood and peace.

This is one of the biggest religious gatherings of the displaced community at a temple situated at a distance of 25 kilometres northeast of Srinagar. As is the custom with Hindu deities, the goddess has many names including Ragyna or Rajna[c], along with variations in honorifics such as devi, mata or bhagavati.

The term kheer refers to a milk and rice pudding that is offered to propitiate the goddess. Kheer Bhawani is sometimes translated as ‘Milk Goddess’. The worship of Kheer Bhawani is universal among the Hindus of Kashmir, most of them worship her as their protective patron deity Kuladevi.
Farooq Ganderbali, President of Voice for Peace and Justice, felicitated the pilgrims.

“Kashmiri Pandits are part and parcel of our lives, unfortunately, the extremism and terrorism created a wedge between the communities but we are incomplete without one another. we shouldn’t rely upon the administration only to maintain peace in Kashmir, instead, we should contribute our part as well,” he said.