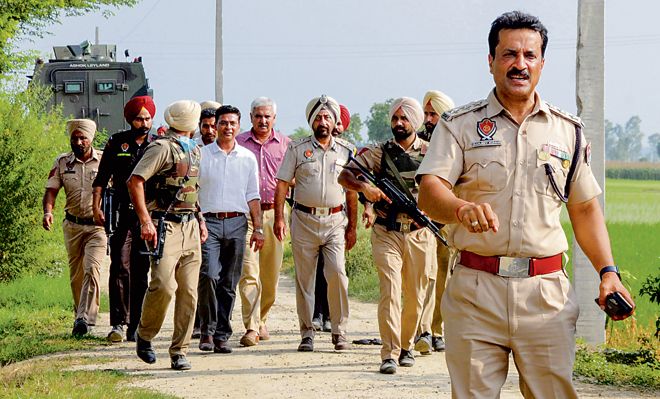 In a five-hour-long operation at a village near Attari, the anti-gangster task force of the Punjab Police today gunned down two gangsters, wanted in the Sidhu Moosewala murder case.

They have been identified as Jagroop Singh Rupa and Manpreet Singh, alias Mannu Kussa, who had been evading arrest since the incident on May 29.

The accused were members of the Jaggu Bhagwanpuria gang

Three of them — Priyavrat Fauji, Kashish and Ankit Sirsa – were held by the Delhi Police

They were part of the Corolla module, who had chased Moosewala in a Corolla car before shooting him at Jawaharke village in Mansa, according to the police.

Three police personnel were injured in the encounter. They sustained bullet injuries in the chest, near the eye and on the thigh. They were rushed to a private hospital where their condition is stated to be out of danger. They have been identified as Sukhdev Singh, Surinderpal Singh and Baljinder Singh. A cameraman of an electronic channel was also injured.

The police recovered an AK-47 rifle and a pistol from the spot. According to eyewitnesses, the encounter started around 10.30 am and ended around 4 pm after GP Parmod Ban reached the spot. The police cordoned off an area of around 1 km around the house where the duo was hiding. Residents were not allowed to come out of their houses during the operation. Ban said the police had been chasing them since the murder of Moosewala. Yesterday, the police noted their movements in the border belt.

“The anti-gangster task force staff and the Punjab Police were chasing them when they holed up in a house surrounded by open fields,” said Ban, adding that the police asked them to surrender. However, they continued firing. The police remained patient for hours before launching a counter attack, leading to their death. Heavy ammunition was used by the gangsters during the shootout. Forensic teams have reached the spot. A bag was also found.

According to the police, Jagroop Rupa and Mannu Kosa were members of the Jaggu Bhagwanpuria gang. Bhagwanpuria provided the two gangsters to Lawrence Bishnoi for eliminating Sidhu Moosewala.

The police had identified six shooters, who were part of two modules involved in his killing. Three of them — Priyavrat Fauji, Kashish and Ankit Sirsa – were held by the special cell of the Delhi Police. Mannu had used an AK-47 rifle for shooting Moosewala. Asked whether the AK-47 recovered from the spot was the same that was used in Moosewala’s killing, Ban said this was part of the investigations.

Meanwhile, the house where the duo was hiding belongs to Balwinder Singh Billa. The police are looking into his antecedents to ascertain whether he has any connection with the suspects in the case. Billa, along with his family, was living at Bhakna Kalan village, while no one lives in the house where the gangsters were hiding.

The police also found two mobile phones from the spot. They are looking into the call details to find out who were aiding them.